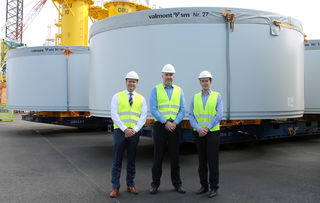 Cuxhaven, 21 September 2018 – On its daily short-sea route between Immingham and Cuxhaven, the "Jutlandia Seaways" operated by shipping company DFDS A/S, called at the Danish port of Esbjerg for the first time in August. The cargo, which was picked up there, was destined for the Siemens Gamesa plant in Cuxhaven and could no longer travel by road due to its dimensions.

The rotor houses for offshore wind turbines made by the manufacturer Valmont SM A/S have a width of up to seven metres, which is why it was not possible to transport the components by heavy goods truck via the roads around the bottleneck of Hamburg. Each weighed almost 32 tonnes. They were therefore collected in the port of Esbjerg and then loaded onto the "Jutlandia Seaways" by Mafi trailer using the RoRo method. The ship, operated by HWG member DFDS, brought the cargo to Cuxhaven in just six hours. The components were unloaded from the ship by HWG member Cuxport and are stored at the Cuxport terminal until they can be transported to the factory when needed by Siemens Gamesa Renewable Energy.

"With the call at the port in Esbjerg, the required components were brought to their destination as quickly as possible, saving several truck tours. According to our Danish customer FREJA Transport & Logistics A/S, handling in both ports and the shipment went smoothly. After this first call at the port, we plan to call at Esbjerg once a month en route from Immingham to Cuxhaven. The next call is already planned for early October. A future expansion of this transport is also possible," explains Marcus Braue, Branch Manager of DFDS Germany Aps & Co. KG in Cuxhaven.

The Cuxhaven Port Association (HWG) represents the interests of Cuxhaven’s maritime companies, institutions and private individuals united by the common goal of marketing and further developing the port at the mouth of the river Elbe. The HWG also promotes Cuxhaven’s standing as the most important port location for offshore wind energy in Germany. Current news about the HWG can be found on its Homepage, on LinkedIn and Twitter.