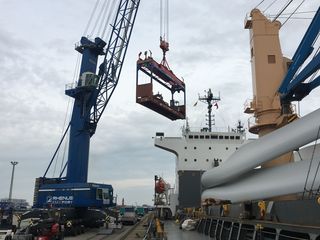 The port services company Cuxport handled a project consignment for the German agent of the Japanese shipper NYK Bulk & Projects through berth 3 at the Europa quay for the first time at the end of July. The crane parts weighing several tonnes were loaded on board the 175-metre long freighter MS Imari for shipment from Cuxhaven to Ho Chi Minh City in Vietnam.

The Cuxport terminal provided an ideal consolidation and shipping port for this project load coming from various production sites because of its good geographical location and its suitability for handling heavy loads. A coastal vessel delivered the jibs that were up to 36 metres long and made by Liebherr in Rostock via the Baltic Sea. The tower parts were transported to Cuxport from a production site in Sunderland in Great Britain by heavy-duty truck via the British ferry port at Immingham on a vessel operated by the DFDS ferry company. After their arrival at their destination in Vietnam, the components will be used to assemble two new port cranes.

“As a multi-purpose port, we’re keeping our eyes open and are not just restricting operations to a few types of goods; we can even handle oversized and very heavy freight efficiently at the Cuxport terminal. We naturally make available this flexibility and expertise for overseas consignments,” said Oliver Fuhljahn, Head of Automobile Logistics at Cuxport, who was responsible for the project.

The shipping company had other project loads from various producers loaded by Cuxport in addition to the Liebherr crane parts; it used its own 100-tonne mobile port crane to handle elements like wheeled and break-bulk cargo. These items were stowed and secured in conjunction with the stevedore company, Atlantik Hafenbetriebe.