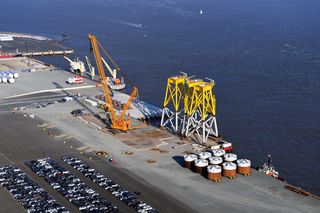 Cuxhaven terminal operator Cuxport is currently serving a major offshore project at the port of Cuxhaven. 20 suction bucket jackets, a new form of foundation for offshore wind turbines, are being assembled and stored at the offshore base Cuxhaven until they are shipped to Ørsted’s Borkum Riffgrund 2 wind farm site in spring.

The wind farm site measuring 25 square kilometres lies 37 to 40 kilometres northwest of the island of Borkum and 57 kilometres from the Dutch coast. Instead of drilling into the seabed, 20 of the 56 foundations for this site are fitted with suction buckets. At the site, GeoSea, the company commissioned with the installation, will lower the foundations onto the seabed, where the buckets are used to create negative pressure and thus attach the foundations firmly to the ground. This significantly reduces the noise emissions and helps to protect the surrounding sea life. The first wind turbine with a suction bucket jacket foundation was successfully tested by Ørsted at the Borkum Riffgrund 1 site. The method has previously been used in the oil and gas industry for around 20 years, but is now being implemented for the first time for offshore wind farms.

Large sea-going barges with three jackets each as well as coasters with suction buckets have been arriving at Cuxhaven since February. An LR 11350 crawler crane, which had been brought to Cuxhaven for this project, lifts the jackets from the barge and places them onto the previously positioned buckets, three per jacket. After they have been assembled, the complete suction bucket jacket structure, measuring more than 50 metres high and weighing 950 tons in total, are transported via SPMT (Self-Propelled Modular Transporter) across the heavy-duty berth to be placed in a specially prepared storage area until the installation vessel picks them up.

“Cuxhaven was specifically chosen because of the optimal local conditions for the handling of these massive components as well as for the operation of the installation vessel ‘Innovation’,” explains Roland Schneider, Head of Business Development at Cuxport. “A project of this magnitude requires precise planning and execution, both for the transhipment and storage as well as the transport. What has been great so far is the excellent communication and collaboration with our customer GeoSea as well as the different partners of the project.”

The installation vessel “Innovation” had already used Cuxhaven as a base port for the installation of the Nordsee One wind farm in 2016. Borkum Riffgrund 2, developed and owned by Ørsted, will feature 56 Vestas turbines of the 8 MW class and have a total capacity of 450 MW – enough to supply electricity to approximately 460,000 households.