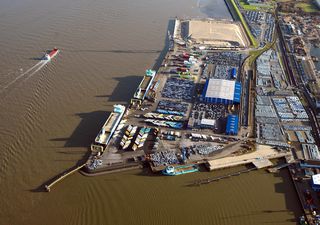 Cuxhaven, 7 February 2018 – The port of Cuxhaven is an important hub for automobile shipments to Scandinavia and Great Britain. The extension of contracts by the HWG member Cuxport with a premium automobile manufacturer to cover warehousing and handling services for new vehicles in Cuxhaven is clear confirmation of this. One crucial factor were the excellent liner connections that the seaport has with daily departures to Immingham in Great Britain and weekly departures to Southampton as well as to ports in Sweden and Denmark.

The relevant agreement was signed to take effect on 1 January 2018 and it will extend the established, long-lasting cooperation for several years. The new vehicles, which arrive in Cuxhaven by train from production sites in Eastern and Southern Germany as well as Austria, are destined for the British and Scandinavian markets.

The UECC and DFDS shipping companies handle the ocean transport services for the vehicles to the United Kingdom. The HWG member DFDS provides daily departures to the British port of Immingham. In addition, there are one to two UECC departures per week to Southampton. The Swedish market is served by two weekly departures by the HWG member “K” Line European Sea Highway Services (KESS). Cuxport also serves as the hub for the on-carriage of vehicles to Denmark by truck.

“Automobile logistics is one of the important mainstays of the versatile port of Cuxhaven. It is not by coincidence that Cuxhaven is placed sixth among the North Sea ports for handling automobiles in 2016 – it transhipped approximately 480,000 new vehicles. We’re proud of the trust that our customers place in our reliable services and overall in the port’s ability with its multi-faceted infrastructure and its efficient, trimodal links to production and consumption centres further inland,” says Oliver Fuhljahn, Head of Automobile Logistics at Cuxport. “The imminent opening of berth 4, which will also offer further handling facilities for automobile traffic, among other things, also proves that the potential here has not yet been fully utilised.”